A Key to the Understanding of Yin and Yang

We are familiar with the description of Yin and Yang as relatively opposing, complementing and mutually nourishing forces. Usually depicted in form of defining charts such as:

Clinically, there is an abundance of insights stemming from this theory.

The Chinese theory of Yin-Yang is an understanding of the basic dynamics of the universal forces. These forces govern all natural phenomena on earth, including the function of the human body and mind.

Generally speaking, this theory describes 2 qualities, which are opposite in nature. Life on earth is possible when these 2 qualities are held together, by what I understand to be a magnetic force. This creates a cycle, famously and brilliantly manifested in the Tai Ji symbol. 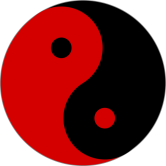 When these qualities of the universe are balanced within the human body, then the physiological cycles are regulated and there is the possibility of healing and maintaining health.

As practitioners, we search for the imbalance in our patients, which has enabled disease to develop, aiming to restore the balance and enable processes of healing to ensue.

However, the transition from a theoretical understanding of yin-yang to a practical application, is not as straight forward as it might seem.

It is often not a matter of just balancing the “quantity” by strengthening or dispersing. It frequently requires restoring the connection and communication of the Yin and Yang forces, restoring their cyclic dynamics, and thus enabling them to communicate and respond to the universal cycles.

In order to enable us to truly understand this complex relationship of Yin and Yang, the Nei Jing presented us a model of the 6 separate components within the unity of Yin and Yang.

In the division and unity of the three yang (vessels) the major yang is the opening, the yang brilliance is the door leaf, the minor yang is the pivot. (These) three yang conduits cannot lose each other. If they beat, but not at the surface, this is called one yang.

In the division and unity of the three yin, the major yin is the opening, the ceasing yin is the door leaf, the minor yin is the pivot. These three yin cannot lose each-other. If they beat, but not in the depth, this is called one yin.

(Translated by Paul U. Unschuld and Hermann Tessenow)

The Shang Han Lun has further developed this separation of qualities, into a precise and efficient diagnostic and treatment model.
The Shang Han Lun teaches us, that each conformation has its own characteristic dynamics in health and in disease. The symptoms mentioned in the text, demonstrate the pathological dynamics. Once we learn to recognize this, we can restore balance. Balance that relies both on equal “quantity” of yin and yang in the body, as well as harmony, cooperation and mutual reinforcement which creates the motion which is life.

This site uses Akismet to reduce spam. Learn how your comment data is processed.